I’ve put time and care into the creation of my eigth album, Study Music, and created something I feel proud of.

Looking backwards, though, I had a hard time with the reception to my seventh album, “Oughta See”, from a few years ago. I was surprised that people didn’t seem to dig it as much my as previous work. It motivated me to ensure that things would go better with my next release.

I determined that I wanted to engage my listeners by soliciting more feedback before I released my next album. I built a stand-alone music feedback web-app - a tool for doing market research of your music within your fan base. 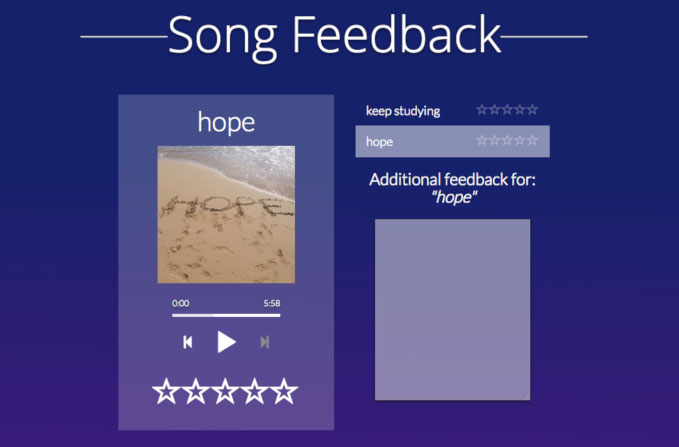 I open sourced the feedback app to anyone who thinks they will find it useful. Here is the demo, a demo of the data collection page, and the github source.

There are a few slightly technical steps required to install the app: you’ll need an AWS account, a dynamodb service, and a couple of AWS storage buckets. This is all explained in the github readme.

Some use cases I’ve come up with for my feedback tool:

I also hope it can be used by other people in ways I haven’t considered.

For point of reference, I made two posts to my Facebook audience of almost 3,000 people. Without using any ads, a little over 100 people used my new tool, of which almost half left additional feedback in addition to rating tracks. It was a great experiment in programming and engagement which also helped me to dial in my album.

Feel free to sponsor my art through donations.

This work is licensed under a Creative Commons Attribution-Noncommercial-Share Alike 3.0 United States License.